Equality in Marriage according to C.S. Lewis

Why should there be a head in the family at all —why not equality? Why should it be the man?

(1) The need for some head follows from the idea that marriage is permanent Of course, as long as the husband and wife are agreed, no question of a head need arise; and we may hope that this will be the normal state of affairs in a Christian marriage. But when there is a real disagreement, what is to happen? Talk it over, of course; but I am assuming they have done that and still failed to reach agreement What do they do next?

They cannot decide by a majority vote, for in a council of two there can be no majority. Surely, only one or other of two things can happen: either they must separate and go their own ways or else one or other of them must have a casting vote. If marriage is permanent, one or other party must, in the last resort, have the power of deciding the family policy. You cannot have a permanent association without a constitution.

(2) If there must be a head, why the man? Well, firstly, is there any very serious wish that it should be the woman? As I have said, I am not married myself, but as far as 1 can see, even a woman who wants to be the head of her own house does not usually admire the same state of things when she finds it going on next door. She is much more likely to say "Poor Mr. X! Why he allows that appalling woman to boss him about the way she does is more than I can imagine." I do not think she is even very nattered if anyone mentions the fact of her own "headship."

There must be something unnatural about the rule of wives over husbands, because the wives themselves are half ashamed of it and despise the husbands whom they rule. But there is also another reason; and here I speak quite frankly as a bachelor, because it is a reason you can see from outside even better than from inside.

The relations of the family to the outer world—what might be called its foreign policy—must depend, in the last resort, upon the man, because he always ought to be, and usually is, much more just to the outsiders. A woman is primarily fighting for her own children and husband against the rest of the world. Naturally, almost, in a sense, rightly, their claims override, for her, all other claims. She is the special trustee of their interests.

The function of the husband is to see that this natural preference of hers is not given its head. He has the last word in order to protect other people from the intense family patriotism of the wife. If anyone doubts this, let me ask a simple question. If your dog has bitten the child next door, or if your child has hurt the dog next door, which would you sooner have to deal with, the master of that house or the mistress? Or, if you are a married woman, let me ask you this question. Much as you admire your husband, would you not say that his chief failing is his tendency not to stick up for his rights and yours against the neighbours as vigorously as you would like? A bit of an Appeaser? 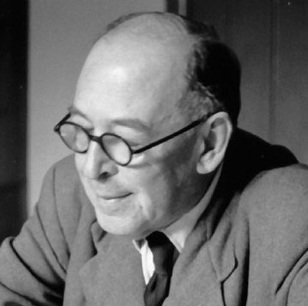 Clive Staples Lewis (1898 – 1963) was a British writer and lay theologian. A close friend of J.R.R.Tolkien. According to Lewis's memoir Surprised by Joy, he was baptised in the Church of Ireland, but fell away from his faith during adolescence. Lewis returned to Anglicanism at the age of 32, owing to the influence of Tolkien and other friends, and he became an "ordinary layman of the Church of England".
Rodzina Gender Małżeństwo Równość